Rambo: The Video Game is a rail shooter video game developed by Teyon and published by Reef Entertainment. It was released on February 21st, 2014.

The majority of the game's story is told through Flashbacks, as a soldier, gives a Eulogy for deceased John Rambo at a military funeral. He begins by talking about Rambo's escape from a prison camp in Vietnam with his fiend and team mate Delmar Barry. They fight their way through Viet Cong soldiers and make it to freedom. Delmar returns home, while Rambo is redeployed, at his own request.

11 Years later, Rambo has returned to the USA, and has become a drifter. He tries to visit Delmar, near the Town of Hope, Washington. He is informed that his friend has died, and he sadly leaves. On the Road, Rambo is accosted by the local Sheriff, Will Teasle who does not want any drifters, Rambo attempts to return to town, and is quickly arrested. Rambo is abused by the deputies, and has flashbacks to his torture as a POW in Vietnam. Rambo fights off the deputies and escapes. After inadvertently killing a deputy, a man hunt begins for Rambo. Rambo picks off the members of the search party, and evades detection. Rambo, returns to town and runs amok, destroying several buildings. When he is about to execute Teasle, he is stopped by his former CO, Sam Trautman. Rambo snaps out of his rampage, and is arrested.

Several years Rambo serving time in prison, he is released for the purposes of undertaking a recon mission to search for POW's at the same prison camp where he was held in Vietnam. Rambo makes contact with Co Bao, a local freedom fighter and his contact. Rambo, finds the POW's and attempts to extract one, but is betrayed and left behind. Rambo is taken prisoner once again, and is interrogated by Lt Col. Podovsky. Rambo escapes with the aid of Co. Rambo plans on abandoning the mission and returning to the US with Co, but she is gunned down in front of Rambo. Rambo is saddened and angered. After burying Co, Rambo goes on another rampage killing Russian and Vietnamese Soldiers, even destroying a local bridge. Rambo commandeers an enemy helicopter, and manages to extract all the POW's, he is attacked by another helicopter piloted by Padovsky. Rambo's helicopter goes down, and Rambo takes Padovsky's chopper down, before killing him with an M72 LAW.

Though it is revealed that Rambo's death had been faked, in order for him get "off their radar" so he can undertake a more personal mission, in order to save Trautman who has been captured by Russians, and is being held at a fort in Afghanistan. Rambo is seen in Thailand preparing to leave for Afghanistan.

Rambo meets with local Mujahideen fighters in Afghanistan. They are soon attacked by Russian commandos and gunship. After the chaos has ended, Rambo heads to the fort, intent on rescuing Trautman. Rambo manages to get inside, but is forced to flee when he is set upon by a massive enemy force. He makes an escape. Rambo attacks again the following morning, and sucessfully rescues Trauman from being tortured. They fight their way out and steal a helicopter, destroying the Fort. Rambo and Trautman make an emergency landing after their helicopter is damaged. The pair seek shelter from attack in cave, and fight of enemy troops. Believing themselves victorious, they emerge, but they are set upon by a larger enemy force, with tanks, and Turrets, and a gunship piloted by Colonel Zaysen, who was responsible for Trautman's capture, He orders them to surrender, Rambo and Trautman settle for a defiant last stand. While fighting off swarms of enemy soldiers, the Mujahideen arrive on horseback to assault the Russians. Rambo manages to steal a tank, and destroys, Zaysen's helicopter, crashing into it, after an ill advised game of chicken. The Mujahideen offer Rambo a place among them. Rambo declines and leaves with Trautman.

Differences from the Films Edit

The Game is made up of several components.

On Rails Arcade style Shooting Galleries, complete with scoring where the player must dispatch waves of enemies. To reach the end of the stage. Game will move Rambo once enemies have been dealt with.

The Game includes vehicle and turret sections. The vehicles movement will be controlled by the game, and the player will only need to control the guns.

The Player is given 5 lives at the start of each stage, to attempt to complete it. Once all five are gone, the stage must be replayed from the Beginning.

The Player must destroy enemy vehicles or buildings, with explosive or heavy weapons. Inspired by scenes from the movie, such as the destruction of Hope Police Station, and Bridge Destruction

Quick Time Events are used for third person set pieces, and fight sequences in lieu of direct control. The QTEs are made redundant if the correct perk is equipped to allow no QTE fails, in which doing them will only offer score points instead of being necessary to proceed.

The Player must use Rambo's Bow or Knife to sneak through areas, and silently eliminate foes. Knife sections allow the choice of lethal or non lethal force, though non lethal force is considerably harder as the QTEs must be performed perfectly.

Successful kills or disarms will reward players by filling the Wrath meter. When activated, Wrath will slow enemies down, though Rambo shoots in slow motion, his aiming speed remains the same. Enemies and Explosives are highlighted with a yellow aura making them easier to spot.

Killing enemies whilst Wrath is activated will restore health. Since there are no health packs, or first aid packs in game, it is essential to use to stay alive in game.

Many of the weapons were used in the films, and many of them were used by Rambo himself, Except where noted.

Desert Eagle~
Add a photo to this gallery 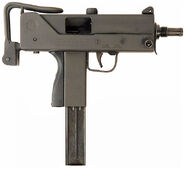 SPAS 12-
Add a photo to this gallery

SVD Dragunov # ^
Add a photo to this gallery

Compound Bow
Add a photo to this gallery

Timed Explosive Arrows~
Add a photo to this gallery 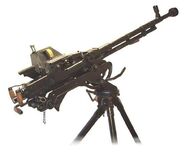 Browning M2 Heavy Barrel
Add a photo to this gallery

M67 "Baseball" Grenade
Add a photo to this gallery

Rambo III Knife
Add a photo to this gallery

The game features a leveling system. As with other games, each level up awards one Skill point. Skill points can be allocated into one of five skill trees, each tree contains five skills for a total of twenty-five. Skill points must be chosen in succession.

Increased capacity for grenades and arrows.

Add another segment to Wrath.

Perks can unlocked through game play. Up to three can be equipped at a time.

Reef Entertainment acquired video game development and publishing rights in August 2011 to the Rambo film series from the rights holder StudioCanal. As of August 2011, the three Rambo series films had grossed over $600 million USD. The publisher said the purchase was fueled by the 2008 Rambo's success and by the scheduled release of the action film Expendables 2, starring Sylvester Stallone. They stated that they plan to use the rights as a launching pad for the company. In August 2011 the publisher said a Rambo game would be released at retail in 2012 and would be available on the PlayStation 3, Xbox 360, and PC. Jeffrey Matulef of Eurogamer said on October 5, 2012, that he did not believe the game would see release before the end of the year. That same month Reef Entertainment said it would be out "soon". Reef Entertainment's commercial director Craig Lewis describes the game as allowing players to "get under the skin of Rambo and wield his iconic weapon-set in battle." Reef Entertainment released three screenshots from the game. The developer used the actors from the film series to provide voices in the game for both John Rambo, played by Sylvester Stallone, and Col. Trautman, played by Richard Crenna. The developer did not actually hire the two actors to provide voice work (Crenna died in 2003) or get replacements but instead they have contacted the owner of the film series, STUDIOCANAL, and acquired copies of the original voice tapes for the series and used them for the game.

A DLC expansion titled Rambo: Baker Team, was teased in 2015, The content of the DLC was several extra missions, serving as a prequel to the game, showing Rambo and his team's capture in Vietnam, with Trophies and Achievements being added to the consoles. However it was seemingly cancelled after no word of it was heard since.

However the DLC resurfaced along with a new trailer, on 18th of April 2016, over 2 years after the games initial release. It was released for free the following day.

Rambo: The Video Game received negative reviews. Aggregate review websites GameRankings and Metacritic gave the Xbox 360 version 46.67% and 32/100. and the PC version 34.00% and 34/100 the PlayStation 3 version 24.00% and 24/100. The game was on numerous worst game of the year lists on both official publications and independent reviewers.

Game critic Joe Vargas of the "Angry Joe Show" made a scathing review, giving the game a score of 2/10 (claiming it only escaped being scored lower by making him laugh at how bad it was) and criticizing almost everything about the game, from horrible graphics and character models, the lazy attempts at "Stealth" game play, the use of the audio from the movie, reusing the same music repeatedly in the same level, and how the game is too easy, except for the final level. His biggest criticism, fell to the how the game is overpriced ($40 at launch on PC and Console.) and too short (2 hours worth of overall content, but final level artificially extends length through unfair difficulty) As well as this, he points out how the trailer doesn't represent the type of game it really is, as it was marketed as a First Person shooter and Stealth game, and never made any reference to being on rails. He placed it at number three on his list of worst games of 2014, behind only The Slaughtering Grounds and Duck Dynasty.

Joe later made a reaction video to the DLC trailer, satirically referencing his review as though he were suffering PTSD flashbacks. He seemed surprised that the DLC was even being made, especially so long after the game's initial release, as many believed it had been cancelled. He commended the developer for seeing the development through to the end, and for not charging for it.

Although many view the game to be inferior to the source material, fans of the series and more casual gamers had a warmer action.

Add a photo to this gallery 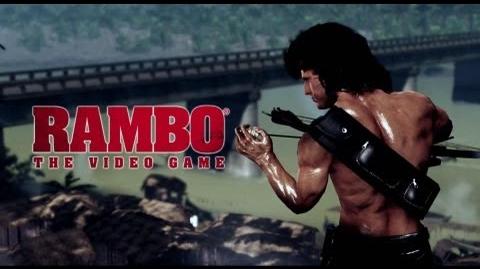 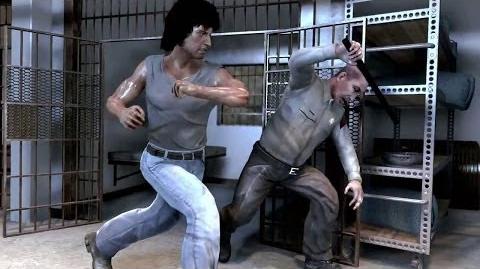 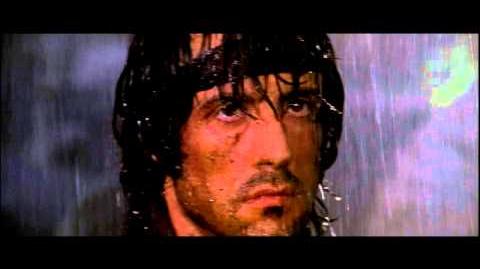 Retrieved from "https://rambo.fandom.com/wiki/Rambo:_The_Video_Game?oldid=11806"
Community content is available under CC-BY-SA unless otherwise noted.