Not to be confused with Lieutenant Aye.

"These boys are now our soldiers! They belong to me now! If you try to get them back, your whole village will burn! If you ask the Karen Rebels for help, I will cut out your tongues! If you go against me, I will feed you your intestines! Hear me, believe me, and fear me!"
—Major Pa Tee Tint

Major Pa Tee Tint also known simply as "Tint" or "Major Tint", was the main antagonist of the 2008 film, Rambo.

Tint was a sadistic pedophile that led a band of ruthless Tatmadaw soldiers, who went from village to village, exterminating their residents in a campaign of fear. Tint appeared to be motivated by the profits he received by selling drugs such as meth and heroin and using them to fund the war effort, but he seems to be only acting on impulse and satisfying his own perverted sexual desires and implementing a system of nightly rape for his men to enjoy.

The actor that plays Tint, Muang Muang Khin, was a former Karen soldier that escaped to Thailand and agreed to take part in the film to raise awareness to the genocide going on in Burma. He also knew of the Tatmadaw Army's brutality firsthand, and shortly after the film was released, the country's oppressive government banned the film and imprisoned Maung Maung Khin's family because of his role in the film.

Tint was first seen overseeing his men force civilians from a destroyed village into a rice paddy they had just thrown live land mines into. Tint casually smoked a cigarette and appeared indifferent to the carnage while his soldiers bet on who would step on one of the mines and forced them to run across the pond, causing a bloody explosion. Afterwards, Tint ordered a firing squad to execute the terrified survivors. Tint was next seen when his men were raiding a village and forcing the boys of the village to join the Tatmadaw Army. He then gave a short speech to the people of the village, telling them to not rise against the government or ask the rebels for help. Tint was next seen raiding the village where Sarah Miller, Michael Burnett, and the other Christian missionaries were staying to provide education and aid to their poverty-stricken residents. Rambo pours gasoline all over the river pirate boat he had earlier killed the owners of, and lights it when he sees the Tatmadaw coming into the village. Men with flamethrowers and guns go through the village, raping the women, abducting the boys and girls, and destroying the village with flamethrowers. Sarah and the missionaries are abducted during this.

Tint is later seen at the Tatmadaw camp, overseeing his prisoners. After one of the missionaries looks him in the eye, Tint orders his men to feed him to the pigs at the camp as punishment for making eye contact as well as also to provide further mental anguish on them, because they were trying to assist the rebels. In the Extended Cut, Major Tint yells at a boy, tears open his shirt and throws him on the ground, where he additionally kicks him. Then the boy gets back in line. In the theatrical version, there is only a shot from the side of Tint yelling. Tint later smoked a cigarette while watching Sarah, prompting her to ask what he wants from them. Presumably because he cannot speak English, Tint does not answer and walks away. When John Rambo leads the rescue mission into the camp, he saw Tint take one of the young boys his men had abducted into his bungalow and close the door while the soldiers were preoccupied harassing and sexually assaulting the young women they had kidnapped from a village. Rambo rescues the missionaries, and the next morning we see that Tint had his way with the boy. Tint orders the men to find the escaped prisoners and drives off in a Jeep.

At the end of the film, Tint recaptures the missionaries and the mercenaries sent to protect them. The only ones, who were not captured by the Tatmadaw, were School Boy, Sarah, and Rambo, who had run off to do whatever he could to slow down the army. Tint is shown to be whipping and beating Lewis mercilessly when Lewis eggs him on. Tint orders their execution, but before the firing squad can kill them all, Rambo commandeers a Jeep-mounted .50 caliber machine gun and begins killing the Tatmadaw soldiers. The soldiers turn their attention on the machine gun, allowing the mercenaries to escape and pick up weapons from soldiers Rambo killed. A bloody gunfight ensues, in which the cowardly Tint runs away to safety, but not before shooting one of the Christian missionaries in the back with his Jericho 941 "Baby Eagle" pistol.

When the Karen rebels arrive and help Rambo and the mercenaries to kill the entire band of soldiers, Rambo spots Tint trying to flee from the carnage. Rambo jumps off of the Jeep and hides behind a tree. As Tint is running up the hill, Rambo jams his machete into Tint's gut, causing him to cry out in pain. Rambo steps out from behind the tree, Glares at the bewildered Tint, and slices his stomach open, in the process cutting his fingers off. Rambo then kicks Tint in the face and knocks him down the hill, causing his intestines to fall out, disemboweling, killing him and finishing the last of the remaining commander of the forces.

Tint is by far the most ruthless, oppressive, vile and sadistic villain seen in the Rambo films. That title previously went to Colonel Zaysen from Rambo III, but it's like Tint read about Zaysen's atrocities and used that as an instruction manual, but outdid Zaysen's brutality. In addition to being a fascist, supremacist tyrant, Tint was also a rapist, murderer, torturer, kidnapper, human trafficker, thief, arsonist, pedophile, drug addict, drug lord, megalomaniac and a coward. When Tint wasn't committing atrocities, Tint gladly let his men do them while he typically watched. Tint's M.O. was to pillage local villages and kill anyone who attempted to fight back, occasionally just killing innocents attempting to surrender at random to send a message. When everyone who was not useful to him was dead, Tint would enslave the attractive Karen women and the strong military-age boys, the women being sex slaves to be beaten and raped by his soldiers nightly, the boys either being hooked on drugs and forced into the military, used for Tint's own perverted desires, or both. Tint would then have the villages destroyed. Then they would move on. Tint's other atrocities included de-mining, forcing civilians to walk in front of soldiers to set off any land mines that may be in their path. Tint and his men also played games where they would arm land mines and throw them into rice paddies, forcing Karen civilians to run across it. They would then gamble on who would not be killed. Tint had probably the most brutal death in the entire series (certainly the most brutal demise for a primary antagonist) and rightfully so. Tint watched his entire battalion get killed, and while he attempted to flee, he, too, was killed. Tint's death marked a turning point for the rebel forces. Unlike other Rambo villains where their motives can be at least seen as understandable if not exactly condone worthy, Tint was acting purely out of concern for his own political interests and sexual desires and solely out of his desire for power. Due to his impulsiveness, it is likely that he had an extreme form of anti-social personality disorder, more commonly known as sociopathy. 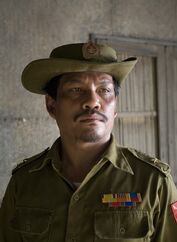 Tint comes face to face with John Rambo for the first and last time.

Tint's corpse.
Add a photo to this gallery

Retrieved from "https://rambo.fandom.com/wiki/Pa_Tee_Tint?oldid=12259"
Community content is available under CC-BY-SA unless otherwise noted.