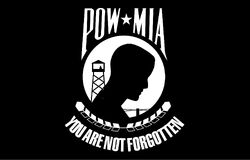 POW/MIA (short for Prisoners Of War or Missing in Action) is an organization composed mostly of veterans that are concerned with the fates of those who went MIA during war, particularly Vietnam, as there were thousands of prisoners of war overseas after the war.

Rambo: First Blood Part II is very accurate by its saying that there were men still held by foreign armies. There were around 2,500 veterans still missing in action, most of them dead or POWs.

Prisoners of war are a frequent topic in the Rambo films, which deal with traumas that soldiers face during and after battle. Rescuing American POWs in Vietnam is the main plot of Rambo: First Blood Part II, and John Rambo himself was a prisoner of war.

POW/MIA was formed in 1971, during the Vietnam War, when the wife of a service member missing in action, recognized the need for a symbol of U.S. POW/MIAs, some of whom had been held in captivity for as many as seven years. The flag is black, and bears in the center, in black and white, the emblem of the league. The emblem was designed by Newt Heisley, and features a white disk bearing in black silhouette the bust of a man (Jeffery Heisley), watch tower with a guard on patrol, and a strand of barbed wire; above the disk are the white letters POW and MIA framing a white 5-pointed star; below the disk is a black and white wreath above the white motto: "You are not Forgotten."

The flag has been altered many times; the colors have been switched from black with white – to red, white and blue – to white with black; the POW/MIA has at times been revised to MIA/POW.

On March 9, 1989, a league flag that had flown over the White House on the 1988 National POW/MIA Recognition Day was installed in the Capitol building rotunda as a result of legislation passed by congress. The league's POW-MIA flag is the only flag ever displayed in the rotunda, and the only one other than the flag, to have flown over the White House. The leadership of both houses of Congress hosted the installation ceremony in a demonstration of bipartisan congressional support.

On August 10, 1990, congress passed U.S. Public Law 101-355, recognizing the National League of Families POW/MIA Flag and designating it "as a symbol of our Nation's concern and commitment to resolving as fully as possible the fates of Americans still prisoner, missing and unaccounted for in Southeast Asia, thus ending the uncertainty for their families and the Nation." Beyond Southeast Asia, it has been a symbol for POW/MIAs from all U.S. wars.

The flag is ambiguous as it implies that personnel listed as MIA may in fact be held captive. The official, bipartisan, U.S. Government position is that there is "no compelling evidence that proves that any American remains alive in captivity in Southeast Asia".

To this day, the flag is proudly flown at many VFWs across the United States, hoping that not only will POWs of every war be found, but also that former POWs may find inner peace.