Mitch Rogers was one of Art Galt's deputies for the Ligget County sheriff's department and is a minor character in First Blood.

Mitch was played by a young David Caruso of CSI: Miami fame.

Mentioned on the survival mode on the First Blood Ultimate Edition DVD, Mitch was born on May 31, 1957 in Rochester, New York.

He attended Lincoln High School but dropped out. He later earned his G.E.D. in 1977. Mitch had a troubled early life, involving shoplifting in May of 1973, petty theft of a car stereo and speakers in July of 1974, for both of which he received juvenile court probation, and posession of marijuana in March of 1975, for which he received community service and counseling. Mitch joined the Police Department in 1975 as a volunteer to complete his community service sentence. He found that he liked it, so while earning his G.E.D. he was doing part-time clerical work at the Hope Police Department. Once he earned his G.E.D. he went to the Spokane Police Academy in January of 1979 and was awarded deputy status in August of that year. The youngest member of the Hope Police Department, he was only 22 years old during the events of First Blood.

He appeared to be a pleasant man that was friendly to Rambo. He warned Rambo of Galt's brutality when Rambo grabbed his wrist after Mitch tried to grab his dog tags. Before they bathed Rambo, after Galt struck Rambo with his nightstick, Mitch spoke out, and later again spoke out to Galt going to dry shave him, but Galt did not listen. Rambo proceeded to snap and escaped using only his fighting skills, and kicked Mitch in the chest. After Galt fell to his death, Mitch heard Rambo was a Green Beret and Mitch admitted that he knew that there was something about him.

Mitch begged Teasle to let the more experienced State Police handle the situation, but an overzealous Teasle grabbed Mitch by the hair and told him that he was going to get revenge for Galt's death. When Mitch believes there may be a chance Art Galt sealed his own fate, Teasle attacks Mitch for suggesting such a thing and says he and Galt were friends in law enforcement when Mitch was a little boy.

Mitch was badly wounded when a camouflaged Rambo jumped out of the bush and stabbed him in the upper thigh after they went to ambush Rambo in the woods. He was the first deputy to be dispatched by Rambo during the forest hunt and his wound was arguably the least painful.

Later, guilt consumed him for what happened at the police station and reported Galt´s and the other deputies´ actions to Lester who, in turn, reported it to Teasle in the presence of Kern.

Much like Lester, Mitch shows respect for Rambo and also realizes that he isnt fully to blame, even after being stabbed in the thigh by him. 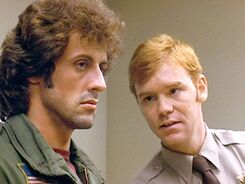 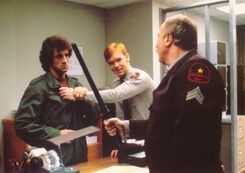