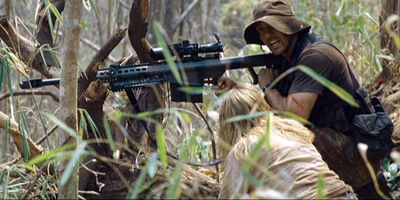 The Barrett M82CQ is a .50 BMG  semi-automatic sniper rifle that is the primary weapon of choice of "Schoolboy".

The Barrett Model 82A1 CQ is the combat version of the M82A1, as spotted by its short barrel. The gun is a total of 48 inches long, including the 28 inch barrel. The gun is a recoil-operated anti-material rifle with a rotating bolt that weighs around 29.7 pounds. The rifle features a deteachable, adjustable bipod that you can use to prop the gun up on any surface and aim easier. The gun's feeding system is a ten round detachable box magazine. The gun also features fixed front sights, adjustable rear sights, and a MIL-STD-1913 optics rail so you can mount objects like a scope on the gun. On top of the scope, an AN/PEQ-2A is mounted. The gun lastly features a Muzzle Brake which is used to incorrectly depict the gun as fully silenced. This is quite impressive because in reality, such a feat is not even possible for a .50 caliber weapon, especially when the only method of supression is a muzzle brake, which only serves to divert the flash to the sides.

Retrieved from "https://rambo.fandom.com/wiki/Barrett_M82CQ?oldid=9983"
Community content is available under CC-BY-SA unless otherwise noted.