"Hey, if you're looking for trouble, you've come to the right place, buddy. "
―Art Galt to John Rambo

Deputy Sergeant Arthur "Art" Galt was a cruel deputy sergeant of the Hope, Washington's Sheriff's Department and the secondary antagonist in First Blood.

He was potrayed by the late Jack Starrett

According to the First Blood Survival Mode, Galt was born on February 18, 1935 in Hope, Washington. He graduated from Hope High School in 1953. Galt enlisted in the United States Marine Corps as a motorpool sergeant in 1953, but never saw combat and was stationed at Camp Lejune, North Carolina. Galt was honorably discharged from the Marines in 1957, however he remained in the reserves until 1973. From 1958 to 1965, Galt managed Ray's Car Lot in Hope, a local car dealership. In 1966, Galt attempted to create his own business in Hope, a restaurant called "Sasquatch Burger", but this venture failed the following year. When he was younger, Galt actually had a considerable criminal record. He was arrested twice for drunk and disorderly conduct, once in 1962 and again in 1967. He was arrested a third time for assault and battery in 1969, however the charges were dismissed. He was arrested for the fourth time in 1969 for driving under the influence of alcohol, for which he received a suspended sentence. Galt was also at one point affiliated with "The Order" a radical paramilitary group that was on the FBI's watch list. In 1970, Galt began working for the Ligget County Sheriff's Department in Hope as a Sheriff's Deputy with his friend, Hope Sheriff Will Teasle. At an unspecified point, Galt was promoted to Sheriff's Deputy Sergeant. He worked as a Deputy until 1982, leading into the events of First Blood.

The Art Galt of the novel is actually a fairly reasonable man. He never does anything to pick on Rambo and is shown to be fairly meek and nervous, wanting not to upset Rambo. After Rambo snaps and uses a razor to attack Teasle, Galt draws his gun but doesn't know how to use it well enough. Rambo uses the razor to slice Galt's stomach open and he dies from disembowelment after he goes to put his intestines back inside his gut. Unlike the middle-aged Galt of the film, the Galt of the novel is said to be a young man who is new to the job and doesn't have much experience in firearms. He is the exact opposite in the film version. However, some traits of the novel's depiction of Galt, such as being a reasonable young deputy, has been shown in the character of Mitch in the film version.

When Will Teasle arrests unstable Green Beret John Rambo, Galt is told by Teasle to book him. Galt, who like Teasle has a particular dislike for hippies and drifters, uses Rambo's sharp hunting knife to slice through a sheet of paper with ease and escorts him to the cells, where he attempts to get Rambo's name. Rambo knows he is innocent, and refuses as Galt begins to lose his patience, so Mitch, one of Galt's deputies, sees Rambo's dog tags and goes to read them, but Rambo instinctively grabs Mitch's wrist. Seeing that as assaulting a fellow police officer, Galt finally worn out his patience, pulls his nightstick and threatens to break Rambo's face in. Rambo lets go and Galt notes that "Hairy is a soldier boy", but this does not change his opinion of Rambo. Meanwhile, Rambo is becoming nervous seeing the iron bars in the police station momentarily reminds him of a grill when he was imprisoned in a tiger pit in Vietnam, and chanting natives threw garbage and dirt through the grill to demean him. Later, with the approval of most of the deputies Galt then quickly moves up to physical abuse and beats Rambo with his nightstick, orders Preston to spray Rambo with a high pressure fire hose and prepares to shave him without any shaving cream.

When Rambo experiences a horrible flashback of the Vietnam War where he was tortured in a prison camp, Rambo's fragile mental state shatters and he fights his way out of the station, beating Galt badly in the process. Rambo grabs his knife and runs off into the forest, stealing a motor bike in the process. In a fit of rage, Galt attempts to use his Winchester Model 88 lever action rifle to shoot Rambo in the street, but Teasle stops him, angrily berating Galt that there are too many people around and the chances are too high that Galt could have killed or wounded an innocent civilian. The deputies are eventually forced to search for Rambo on foot, and he climbs down onto a steep cliff to elude capture. After spotting Rambo from a helicopter, Galt blatantly disregards protocol and attempts to shoot him in cold blood to retaliate for assaulting him back in the station. When the pilot see this, he angrily objects to this, saying that he and Galt are supposed to spot him, not to kill him. Galt ignores this and threatens to kill the pilot if he doesn't stay straight. Galt's behavior and insubordination would have been reported to local TV stations, Teasle would be forced to take Galt's badge away and he would be prosecuted. Rambo drops into a mass of trees, getting a deep gash in his arm in the process. Cornered and terrified for his life, Rambo is forced to throw a large rock at the helicopter's windshield in self-defense to buy him some time.

However, the helicopter loses control and pitches, and Galt, who had deliberately unbuckled his safety belt in order to get a better shot, falls out of the aircraft to his death at the bottom of the rocky gorge, a hundred feet below. The pilot, fearing for this, then flies away. Teasle, who did not see Galt's attempt to kill Rambo, flies into a rage and vows to avenge his friend's death. Rambo then finds Galt's body and looks at it in a deranged rage. Rambo shakes Galt's lifeless corpse in fury, remembering the chilling things the now dead Galt did to him. However, Rambo hears the others coming, so he takes Galt's rifle and coat before leaving for the woods.

In a deleted scene, his body is being shown taken away from a chopper, where his widow cries upon seeing it while being comforted by Lester.

"I'm fine with doing it the hard way."
―Galt in Rambo: The Video Game

Galt was a cruel, sadistic, arrogant man, even more brutal than the film's main antagonist, Will Teasle, who is his closest friend, and is the only person who perishes in the film. Aside of being a sadistic and rude control freak, Galt was more than willing to abuse his power to brutalize people he is not fond with, such as John Rambo, which proved to be the last mistake he would ever make.

A violent thug, Galt was a particularly deplorable human being who liked to demonize people who he sees as lower than him, shown as when he beat John Rambo and demeaned Leroy by telling him to "sling that paint, boy". While it is apparent that Galt's co-workers didn't give him any trouble, he did not appear to be well-liked by really anyone he worked with (with the exception of Teasle) as nobody seemed to care when he died except for Teasle (and his unnamed widow in a deleted scene). It is strongly implied that Rambo is not the first person that Galt has brutalized. Also, despite being best friends with Teasle, it appears to be one-sided that Teasle was oblivious to as Galt was willing to disobey Teasle out of his own selfishness two times in the movie when Rambo escape police custody (the first time with Galt preparing to shoot Rambo on the street that prompts Teasle to physically disarm him to prevent him from harming any of the townspeople and second time when Galt was trying to gun down Rambo from the helicopter and ignoring Teasle's orders on the radio which leads to his own death).

Even after finding out that Rambo was in Vietnam, his hatred for him increased and he decided to beat Rambo severely. It is unknown as to why he did this, possibly because he thought Rambo was using his veteran status to receive special treatment (another theory is that due to Survival Mode revealing Galt to have been in the United States Marine Corps in Infantry, but never saw combat and Teasle expressing prejudice against Rambo for being a Vietnam War vet who puts Korean War vets like Teasle in their shadow, it's possible Galt harbored similar vindictive jealousy for Rambo being a veteran who actually saw combat, while non-combat vets like Galt are forgotten along with Korean War vets). Another theory is that Galt was simply bored and fed up with Rambo's attitude and used his power and authority to "keep him in line".

Teasle grew up with Galt and worked with him, so he had to have known that Galt was brutalizing the criminals and let it slide. Although Teasle claimed that Rambo murdered a police officer", he was clearly thinking with his heart and not his head. Teasle knew about Galt's nature and disposition and knew that Rambo likely killed Galt in self-defense, which is what happened, coupled with Galt's own foolish actions. Although Rambo would be charged for destruction of property, he would likely not be charged with Galt's death.

Despite not being the primary antagonist of First Blood, he is actually more of a villain than Teasle, and it can be argued that, because of this, he is actually the primary antagonist of First Blood, as the rest of Teasle's actions are to avenge Galt's death. However, Galt died pretty early on in the film, so it can be argued that he is the secondary antagonist, but more of a villain than Teasle himself, the film's primary antagonist. Galt's carefree attitude to the horrible acts he regularly commits is loathed by fans of the series, and he is often thought of as the least likeable antagonist in the entire series, aside from Tint, the merciless paedophile from Rambo IV. 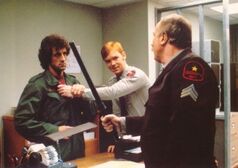